The Incitement Fallacy is that free speech incites violence and so must be regulated.  However, the truth is that the failure to condemn incitement is what leads to violence.  For example, Hitler succeeded not because he was a brilliant speaker, but because no one challenged him.  Why not?  Because people expected their government to control people like him.  In fact, top Nazi propagandists were prosecuted under Weimar ‘blasphemy’ laws originally intended to protect the Jews from the ‘blood libel’.  So Jews were mostly silent as the Nazis were radicalized while sitting in prison, and then as they rose to power.  The rest is history. 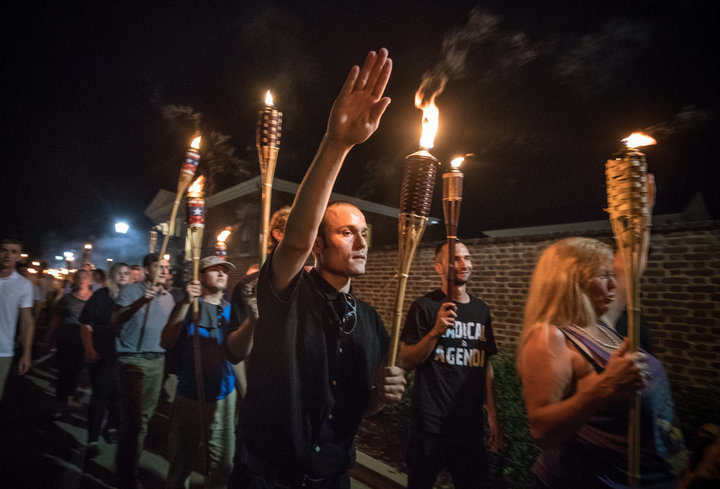 The ADL and SPLC propagate the fallacy with the message, “Report Nazis to the police (who we trained) and go home and do good deeds.”  The result will of course be another disaster.  They even say, “Don’t go to Nazi events because then you deprive them of an audience, which is what they want.”  As if we would be radicalized along with the other bitter white men!

Fortunately a small number of Jews (along with lots of Americans) see through this perfidious fallacy, and showed up and said, “Don’t even.”  And fortunately that’s all it takes.  As many wise men have explained, the problem is not the existence of evil people, but the failure of the ‘good’ ones to speak out.  (Ironically another reason many Jews are silent even when there is no threat to their safety is that they don’t want to ruin their chances of being selected as kapo by the Nazis.  I call them kapowards.)

People think if you give people freedom then they’ll just go crazy with it. For example, the drug war: if you let people do drugs they’ll all go crazy and rob drug stores and kill themselves. But Portugal shows that in fact the opposite happens – decriminalization results in a decrease in drug use, crime and death.  (Which makes the Philippines drug war particularly baffling or perhaps explains it.)  Same for religion: Europeans think if you let people practice religion freely that they’ll concoct increasingly crazy religions and end up ruining everything.  This is the justification for Laïcité – the French Secular Caliphate.  But of course, we really become more conformist. And this dynamic is especially true with guns. Europeans think we’re crazy to have such lax gun laws and imagine we’re shooting each other in the streets or will at any moment.  But in fact the most violence is where gun laws are most strict, like Chicago. Whereas cities like New York are actually safer than London.

Similarly British people think that libel laws are great even though they lead to the Grenfell Tower fire (whistleblowers were threatened with lawsuits) and thus the solution is even more government regulation.  They think free speech is a free for all and you can just come here and say whatever you want, even if you ruin other people’s lives.  This, they imagine, is the spirit of American rebelliousness, and why they lost the war 250 years ago, even if they are the better and more ‘civilized’ because of it.

I believe in total freedom and informational transparency…I’m an extremist when it comes to that. That’s why I love the U.S. I love the presumption that expression is free and I want to make fullest use of that liberty that the internet provides.

He published Hulk Hogan’s private sex tape, and was completely stubborn and unapologetic when asked to remove it.  His website was destroyed by Hogan and Peter Thiel’s $140M lawsuit.  The American jury could smell the impudence on his breath and punished him for his presumption.  Free speech is not a free for all.  It comes with responsibility.  (Having said that, I think the judgment was too large and no one really cares about Hogan’s sex life, or Thiel’s sexuality.)

It’s a strange paradox about freedom.  We fear it will bring on the apocalypse.  In fact a favorite canard of the socialists is that libertarianism will result in a country like Somalia.  But in fact, Somalia was corrupted by Western intervention, and freedom (along with a fair legal system) actually results in peace and prosperity.  America is a great example of that, and Europe needs to follow our lead and rescind its oppressive web of ‘hate speech’ and ‘incitement’ and ‘holocaust denial’ and other such laws before it’s too late.  Ironically it will be Piers Morgan’s despised ‘gun nuts’ and “people who shouldn’t own firearms” who will come to their rescue – again.

The transition to freedom is frightening because people think that they might go crazy.  For example, people thought that California would break off into the sea as a result of pot legalization.  But so far that hasn’t happened.  Just make reforms gradually, and people will naturally develop healthy habits of self-control, whether it’s with speech or drugs or anything else.  Everyone will be fine.

4 thoughts on “The Incitement Fallacy”